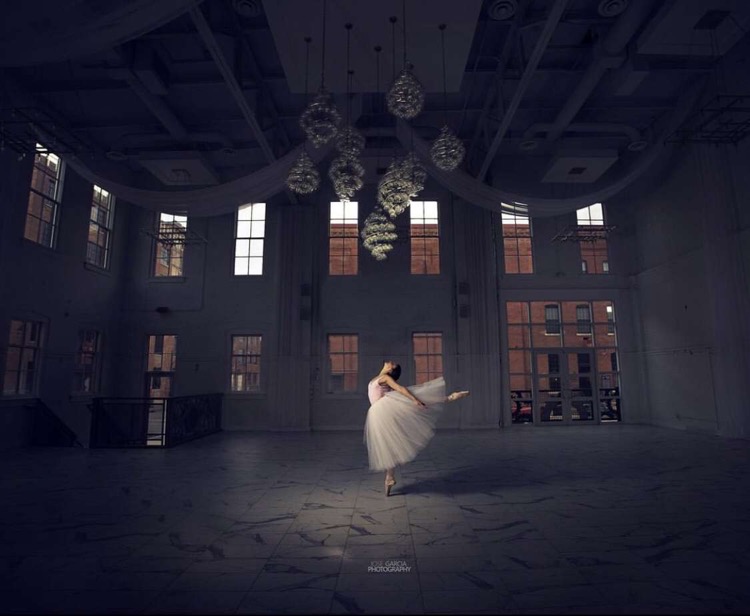 Ava Hoelscher, ’22, dances in her spotlight

Walk a Mile in her Pointe Shoes

As it reaches midday, sunlight floods in from the semi-circular window casting an intricate shadow of circles inside of circles onto the grey floor. The window, an emblem for the Heartland Ballet, produces a natural spotlight on the performers in training.

Twelve socially-distanced dancers grasp the oak wood barre secured to the wall, swinging their legs lazily forward and back in an effort to loosen up. They place their feet in first position and begin their warm-up with pliés.

After a few dance combinations, they shed the first layer of sweaters and slippers. The room is silenced with an authoritative clap from the director. Like a bootcamp trainee, the ballet dancers stand to attention, halting their pre-rehearsal rituals. The director, Megan McLeod, calls out an eight count to learn and then directs them to their various spaces. Each girl hurriedly gets to her spot to await the musical cue.

Those who are not on stage during this section escort themselves to the sidelines. Prohibited from sitting and resting, the dancers continue their stretching while observing the ongoing instruction.

Every once in a while, a dancer’s eye will wander to the gallery of photographs of the company’s legendary performers: men and women who performed for the Heartland Ballet and went on to dance professionally at highly competitive companies like Joffrey and The American Ballet Theatre. The amateurs use these professionals as motivation towards their own aspirations.

In addition to the photographs of performers is a stately portrait of Marina O’Rourke, the Heartland Ballet’s artistic director, and Tanya Bechenova, her mother and foundress of the studio – two remarkable women for young girls to model themselves after. Authoritative, poised, unrelenting, they hold their dancers to high standards. Even after the beloved Tanya Bechanova’s passing, her picture reminds the dancers of those standards (and to point their toes).

A dancer’s desire for beauty cultivates a competitive environment, but the tension built by this desire creates a dynamic, unique to a ballet studio. Peers compete for the attention of the director while simultaneously cheering on each other’s every accomplishment. Every eight count feels like a victory or a loss, constantly tallied and compared to the score of their most cherished friends.

The groups switch to learn new choreography. They move through their different formations with precision, from a straight diagonal to a symmetrical parabola. One sets herself center stage, which is marked by a bronze trophy of a nude dancer in the role of Cupid, awarded to Tanya Bechenova. The others spread out on lines numbered one through four.
“All right, dancers, you will be doing a glissade grand jeté contretent sote arabesque waltz under susu port de bras seven and eight,” the director declares rhythmically. They mark through the combination and return to their original positions to practice the dance with the music.Once the music plays, every dancer begins in unison. Each tilt of the head is identical, and every leg is raised to the same degree. The music is abruptly interrupted to receive notes on the performance. McLeod delicately puts down her notebook to demonstrate while she speaks, “I liked the port de bras, but it’s expressive; it’s so much better when you lean and move your neck with it.”

She walks around the room, dramatically tilting her upper body from left to right, enticing the dancers to mimic her nuanced motions. After hours of weaving through this pattern of instruction, practice, and corrections, the rehearsal ends. Dancers cocoon themselves back into their warmups and chug their water bottles unremorsefully. With no energy in their muscles or toes left to support them, they cascade down the three flights of creaky staircases, eager to finally sit after the five hour-long practice.

Despite their fatigue, the productive afternoon eventually strengthens their resolve to make this production spectacular. To craft an illusion, a magic show of airy grace, to enchant their soon-to-be audience.

If you want a picture to show with your comment, go get a gravatar.

The Gleaner • Copyright 2021 • FLEX WordPress Theme by SNO • Log in