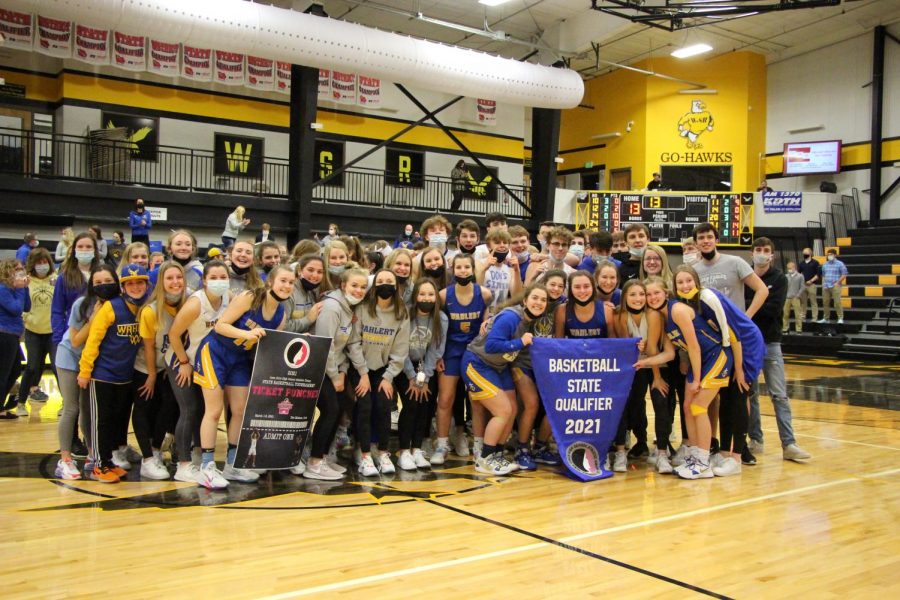 Gallery|7 Photos
Ana Rivera
LOUD AND PROUD The Eagle’s Nest joins the girls’ basketball team as they pose with their state qualifier banner.

To qualify,  the girls beat fifth-ranked Waverly-Shell Rock, 52-46, in the regional finals. This is the first time the girls’ basketball team has qualified for state since 2013. Last year when they played Waverly-Shell Rock in their second regional game, they lost, preventing them from going to state.

This year was different. Nora King, ‘23, explains how it felt to beat them in this game.

Maya Wachter, ‘21, explains what brought them the win.

“I think we all just wanted it more. I honestly think we were pretty even teams, but our team just had a lot of heart, and we knew that this was not gonna be our last game,” said Wachter.

Going into this game, the team had high expectations. Ana Chandlee, ‘21, explains.

“Going into the game, I knew that we obviously weren’t predicted to win, so we had a lot of things to prove. It just made me want to work even harder, and I knew we could win; I knew it would be a battle, and it was, but I’m so glad we won,” said Chandlee.

The girls have been preparing for this game for the past week. Their preparation was slightly different than what they typically do for their other games.

“It was a little different because we’ve never played somebody that tall [Waverly-Shell Rock’s 6’2 post] obviously, so we had to kind of change up our game plan. We let them shoot outside shots, which was a little weird for us, but we just clogged the middle, and I think we did a good job of shutting her down,” said Wachter.

The seniors especially are proud of their accomplishment.

“It’s honestly the best feeling in the world. I’ve never been happier, and I’m so proud of everyone.” said Chandlee.

Now that they’ve qualified for state what’s next?

“I think we need to focus for our big game on Tuesday. Give 100 percent at all practices and that will carry on to the game,” said King.

The team has its first state tournament game against no. 1 seed Glenwood on Tuesday, March 2nd.

The Gleaner • Copyright 2022 • FLEX WordPress Theme by SNO • Log in