Girls’ basketball players will miss seniors, bond with each other 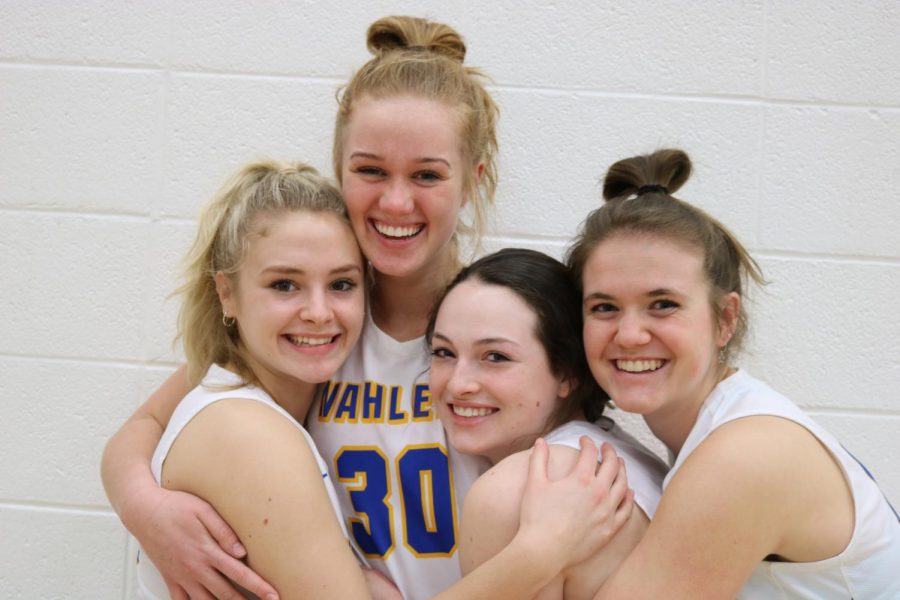 The girls’ basketball team ended its season last Saturday night in a hard-fought game against Waverly-Shell Rock. Although it  has been an up and down season, the girls say they will miss all of the team chemistry and playing the sport they love.

“It’s an awesome experience being a freshman on varsity and playing with this team. I’m going to miss it,” said Emma Donovan, ‘23.

Donovan is one of two freshmen on the varsity team alongside Nora King, ‘23. Despite being freshmen, they consistently contributed to the team’s success,. Donovan averaged 6.2 points per game and 5 rebounds per game, and got double-doubles against Cedar Rapids Washington and Hempstead. King offered relief in the point guard position as well as contributing to scoring.

The Lady Eagles took on Waterloo East in the substate quarterfinal on Feb. 19th. Facing a team that was winless and  gave up an average of 71.4 points defensively throughout the season, the girls charged to an early commanding lead of 24-2 at the end of 1st quarter.

Mary Kate King and Allie Kutsch, ‘21, both had 19 points, Morgan Herrig, ‘20, had 10 points, and the duo of freshmen Donovan and King combined for 20 points. The whole team showed great defensive effort, forcing the Trojans to a whopping 35 turnovers and getting 20 steals as a team. They also out rebounded East 29-17.

In the semifinal against Waverly-Shell Rock, the girls faced an 18-2 Waverly-Shell Rock team. As the higher seed, the Go-Hawks were the home team. The girls fell behind early and were down 28-14 at halftime. The Eagles made a late fourth quarter run, but it ended up being too little too late, and they lost 43-53

This season’s sad ending won’t stop the girls from  making a run next year with King, Kutsch, and Ana Chandlee, ‘21, all returning for their senior year. Although seniors Morgan Herrig, Maggie McDermott, Libby Perry, and Anna Jensen are all graduating, the juniors who have played extensively this season and the underclassmen as well have gained valuable experience, which will prove useful in the future.